Commercial Real Estate News / Technology / The History of Blockchain and Cryptocurrency: Who Invented It and How Does It Work?

The History of Blockchain and Cryptocurrency: Who Invented It and How Does It Work? 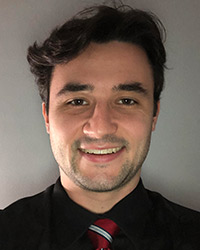 Blockchain and cryptocurrency technology have taken the world by storm in the past few years, enforcing the idea that internet commerce must rely on decentralized cryptographic proof rather than third-party trust in banks and other traditional financial institutions.

However, it may not be apparent to everyone what exactly these technologies are and why they seem to be so revolutionary.

We’ll go into detail on both topics, providing you with everything you need to know about blockchain technology and cryptocurrency as we know it today in a single, comprehensive guide.

Plus, you’ll learn about the origins of these technologies as well as their advantages, specializations, and benefits. We’ll end by briefly discussing how we believe cryptocurrency and blockchain will change commercial real estate.

The Inception of Cryptocurrency and the Blockchain 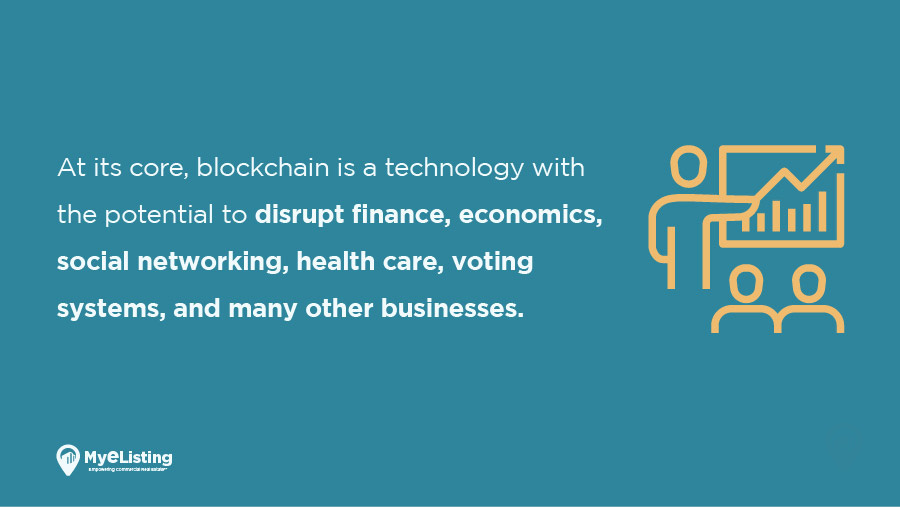 At its core, blockchain is a technology with the potential to disrupt finance, economics, social networking, health care, voting systems, and many other businesses. But it all started with Satoshi Nakamoto.

In 2008, Satoshi Nakamoto published a paper titled Bitcoin: A Peer-to-Peer Electronic Cash System. The paper described an anonymous peer-to-peer system where participants transfer digital currency directly (without going through a central bank) using a cryptocurrency called Bitcoin as payment for goods and services.

Bitcoin officially launched about a year later, in 2009, when, on January 9th, the first Bitcoin block was mined.

Since 2009, several cryptocurrencies, including Ethereum, have germinated from Satoshi’s revolutionary concept of digital currency transfer.

How the Blockchain Works to Create a Transparent Record of Transactions

Participants in a peer-to-peer system like Bitcoin maintain a shared, transparent record of all transactions, called a blockchain. The blockchain contains records of every transaction that’s ever been conducted on that peer-to-peer network.

All users are involved in verifying and approving these transactions so they can be added to new ‘blocks’ or records. These blocks are then cryptographically linked together (hence the term "blockchain") to form a constantly growing chain, which is then verified by other users on that network who apply complex mathematical algorithms to verify if new transactions are valid.

This requires a massive amount of computing power (or energy) as each block contains several complex mathematical algorithms that must be solved in order for them to be validated.

How is Bitcoin valuable?

Bitcoins have value because they are not subject to government regulation like traditional currencies; instead, it uses consensus in computing power on peer-to-peer networks to verify transactions using cryptography (the process by which codes are created from simple text). This process is called mining.

However, the ultimate supply of Bitcoin will be finite: The number of Bitcoins you can get from mining is "halved" upon the completion of every 210,000 blocks, meaning this number is cut by 50%.

In total, there will be 64 halvings, with the last expected to occur in 2140. Altogether, this means that there will only ever be 21 million Bitcoins in existence.

Bitcoin is the first, most popular, and most valuable cryptocurrency by market capitalization in the world. It’s been around for the longest time and still maintains its popularity after nearly 15 years of existence.

Other popular digital currencies include:

Many other digital currencies exist thanks to the inception of Bitcoin, but these are some of the most popular. It’s worth noting that these alternatives to Bitcoin also feature finite supply but do not “halve” in the same way as Bitcoin does. 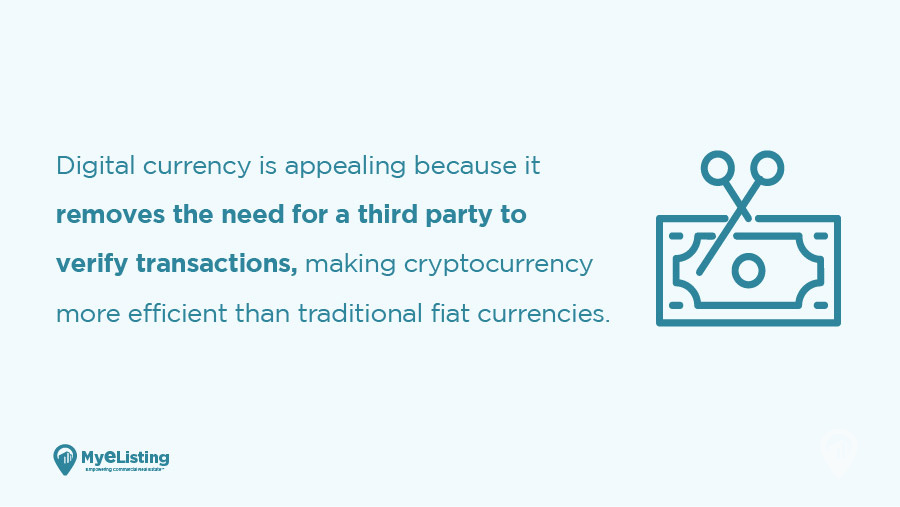 Digital currency is appealing because it removes the need for a third party to verify transactions, making cryptocurrency more efficient than traditional fiat currencies. At the core, this is the mission statement of all cryptocurrencies.

Transactions are instant, so there’s no waiting for transfers to process or orders to clear. There are also fewer fees associated with digital currencies than traditional banking services, making them more affordable.

Other advantages of cryptocurrency include the anonymity it provides. You can buy or sell anything without leaving any trace of your personal information (this, however, is often argued as a disadvantage).

The blockchain is a distributed ledger that stores data in sequential blocks. These blocks are linked together to form a chain, which allows information to be shared without the need for a centralized hub or authority.

Blockchain technology provides protection against cyberattacks because of its immutable and encrypted data, which makes it more difficult to hack sensitive information.

Another advantage of blockchain technology is that it reduces the risk of errors because there are multiple copies of the same data, which makes it less likely for bugs to occur. This is due to each block on the same blockchain retaining the very same record of transactions.

What do cryptocurrency and blockchain mean for the commercial real estate industry? 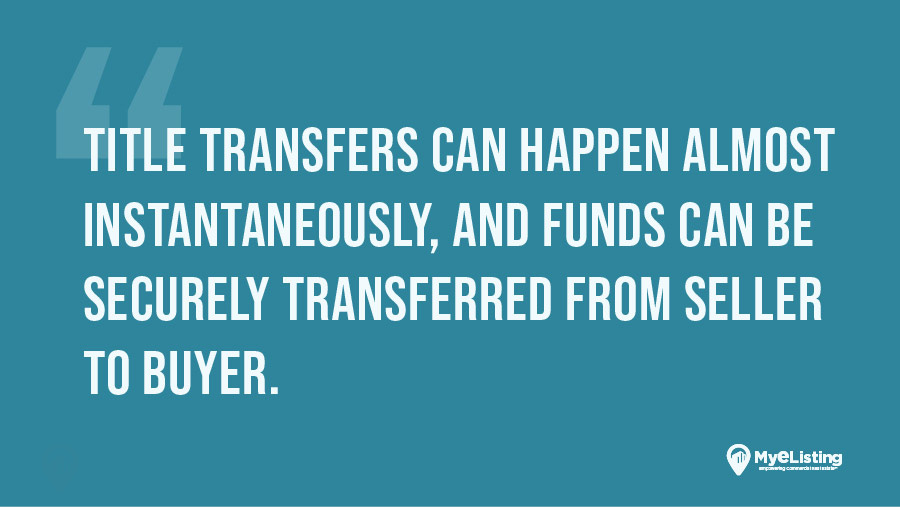 Amidst all these benefits and advantages live many practical, real-world use cases for cryptocurrency and blockchain. Among these are commercial real estate deals.

Cryptocurrency and blockchain technology have the potential to not only vastly decrease the time it takes to complete a commercial real estate deal, but they’ll also do so in a way that retains security, transparency, and even anonymity.

Deal times can shrink from three months to as little as three days. Title transfers can happen almost instantaneously, and funds can be securely transferred from seller to buyer.

You can list and browse commercial real estate for free right here on MyEListing.com.

Other articles in Technology

What Are Commercial Comps & How Do They Work?

The CRE world becomes more and more technical every single day, and it’s important to know what tools to use as a newcomer. ...

Will the Next Big Deals Take Place on Commercial Real Estate Apps?

If you’re going to expand your role within the industry, it’s time to see how old techniques become new again through the way we use technology....

What Is Flex Industrial Space?

Preparing for a Recession in Commercial Real Estate

Learn how to prepare for a recession in commercial real estate and stay ahead of the curve before the next downturn....

The Best and Worst Cities for Women in Real Estate

MyEListing found which cites and metro areas are the best and worst for women working in real estate....

Understand the most common and important commercial real estate definitions with our guide....

Get the data you need. Click here
Digital Media Services