Philadelphia, PA vs. Harrisburg, PA: Which Is Better for Businesses?

If you are torn between two potential cities, you’re certainly not alone. Philadelphia and Harrisburg are two incredible options for those looking to call Pennsylvania their future home. Of course, one will likely be a better fit for you.

Let’s take a look at how you can determine which city would be best for your business. 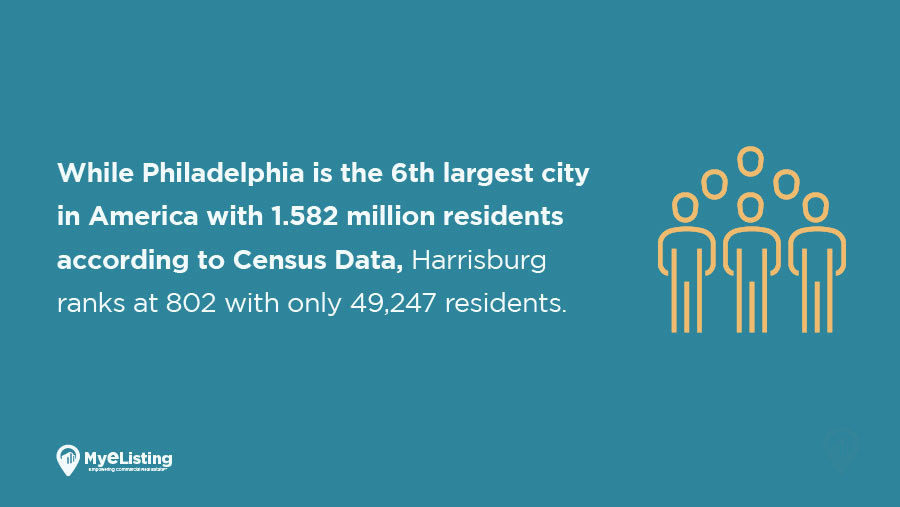 To kick off this evaluation, it’s important to point out that these cities’ largest differentiator is likely their population.

While Philadelphia is the 6th largest city in America with 1.582 million residents according to Census Data, Harrisburg ranks at 802 with only 49,247 residents.

This means that Philadelphia is over 32 times the size of Harrisburg.

Of course, this doesn’t mean that Harrisburg can’t offer businesses what they need to succeed. In fact, its much lower population might actually work in your favor, as we’ll explore now.

Now that we know the population size of these two cities, it’s important to understand who makes up that population: Businesses need to know if their target market is actually living in the area.

Here’s a quick overview of some key demographics for each:

Median Age: The U.S. Census Bureau compared these two relatively young cities with a median age of 31.5 years in Harrisburg and a slightly higher 34.6 years old in Philadelphia.

Level of Education: There’s a slight difference in education between these two cities: 85.7% of Philadelphia residents have completed high school, while only 81.5% of Harrisburg residents can say the same.

Meanwhile, Philadelphia is sitting at 31.2% of the population with a Bachelor’s degree, and Harrisburg is nearly 10% lower at 22.6%.

Poverty Rate: According to a 2020 Census.gov comparison, 23.1% of Philadelphia residents and 26.5% of Harrisburg residents reported living in poverty. However, this number likely isn’t representative of the current conditions.

Occupation: The largest employers in Philadelphia include the University of Pennsylvania and Penn Medicine, Thomas Jefferson University and Jefferson Health, the Children’s Hospital of Philadelphia, and Comcast.

Meanwhile, Zippia reports that Harrisburg residents are largely employed by the Pennsylvania Department of Transportation and Valenti Mid-Atlantic Management LLC.

Despite the size differences, the difference in average household income is actually quite small.

According to DataUSA, the average income in Harrisburg is $41,831 per year while families in Philadelphia earn an average of $49,127 per year.

When you compare commercial opportunities, you’re going to want to focus on the size of local businesses and the availability of office, retail, and industrial space.

Philadelphia’s commercial real estate market is vibrant and growing while Harrisburg has a limited selection of office and retail space, but there is more industrial space available. 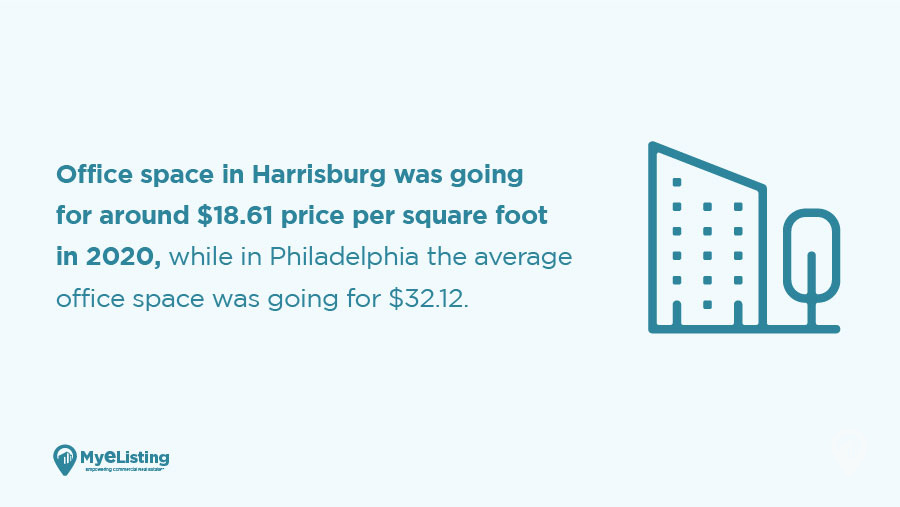 You’d expect vacancy rates to be fairly similar between the two cities. However, as of 2020, Harrisburg was sitting at 10.87%, and Philadelphia came in quite a bit lower at 9.03%.

The outlook for the CRE market in Harrisburg is also positive; while specific estimates are currently unavailable, the office and industrial sectors are expected to see the most growth, while the retail sector is expected to remain stable. 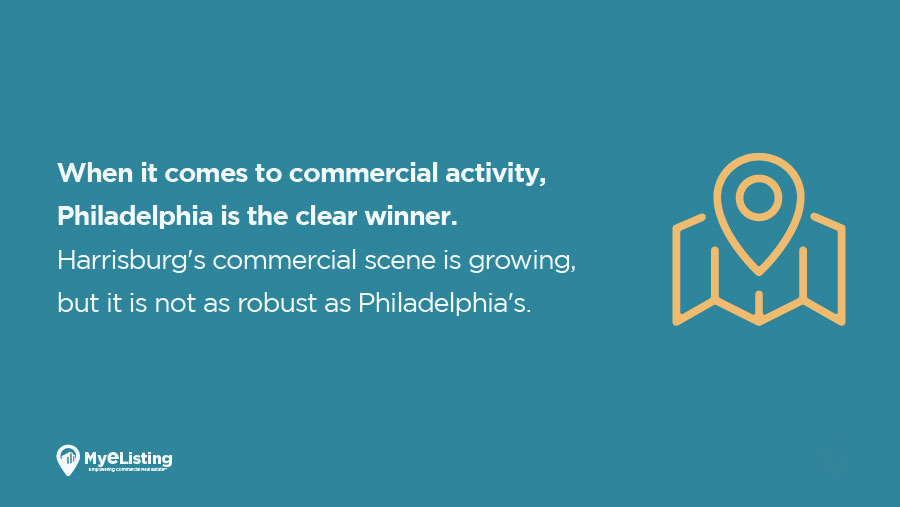 When it comes to commercial activity, Philadelphia is the clear winner. The city is home to numerous businesses of all sizes, and there is a healthy mix of office, retail, and industrial space available.

Harrisburg’s commercial scene is growing, but it is not as robust as Philadelphia’s.

The retail scene in Philadelphia is vibrant, with a mix of local boutiques and national chain stores. The city is also home to several large malls, including the King of Prussia Mall, which is the largest mall in the United States.

Harrisburg’s retail scene is not as robust as Philadelphia’s, but there are still a number of local boutiques and national chain stores. The city also has a few large malls, but they are not as large or as numerous as the malls in Philadelphia.

Philadelphia’s industrial sector is strong, with a number of warehouses and storage facilities. The city is also home to a number of manufacturing and logistics companies.

Harrisburg’s industrial sector is also strong, but obviously, due to the difference in city size, there are not as many warehouses and storage facilities. The city is still home to a number of manufacturing and logistics companies, but not nearly as many as Philadelphia.

Philadelphia’s office sector is booming, with a number of new office buildings being constructed. The city is home to a number of large businesses and corporations, as well as a healthy mix of small businesses.

Harrisburg’s office sector is also growing, but it is not as robust as Philadelphia’s. The city has a limited selection of office space, but there is a healthy mix of small businesses.

In 2020, Philadelphia announced a project which would deliver "more than 1,000 new multifamily units." These included locations like The Laurel, Dranoff Properties’ ArtHaus, River Walk, and a large mixed-use residential tower at 1300 Fairmount Avenue, which broke ground in 2019.

Harrisburg is working hard to provide new leasing opportunities and multifamily residences as well. According to their own 2020 housing report, the city averages around 105 new housing units annually.

Deciding Which Location Is Right for Your Business

So, which city should you choose for your business? If you’re looking for a vibrant city with a healthy selection of commercial real estate, Philadelphia is a clear choice.

If you’re looking for a city with more affordable commercial real estate, Harrisburg may be a better option. Whichever city you choose, do your research, stay diligent, and happy investing.

You can list and browse commercial real estate in Pennsylvania for free right here on MyEListing.com.

Other articles in GENERAL CRE

With unemployment below the national average, Alabama is presenting serious opportunities for industrial real estate investors in 2022....

Although vacancies slightly increased in Southern Nevada, rising rental rates continued their trajectory as more residents relocated to the Entertainment Capital of the World....

Chicago, IL vs. Aurora, IL: Which Is Better for Businesses?

Chicago’s impressive growth trajectory is expected to slow down from rising interest rates and decreased spending. Aurora may offer more affordable options for newer and small...

Despite economic concerns and the Fed’s aggression towards inflation, the industrial sector in Central Florida seems to be immune to headwinds....

Other most recent articles

How Landowners Can Make Money During Dove Season

As dove season approaches, landowners can make money by allowing hunting on their property. Here’s how to make your land more attractive to doves and what you can earn....

Foreign funds are clamoring for dollar-denominated assets. Here are 5 ways to facilitate its arrival into designated projects....

Is San Francisco’s Commercial Real Estate Market on the Verge of Collapse?

The aftermath of the pandemic has left San Francisco’s commercial real estate market reeling from the effects of work-from-home culture, leaving many to hypothesize an imminen...

Is Owning a Car Wash a Good Investment?

Owning a car wash can net you as much as $500k a year in profit, but the journey to get there is no walk in the park....

Phones that work the way you do
Port-a-Potty

Get the data you need. Click here
Appraisal Company