The Riches Are in the Niches: Look to Campgrounds for High Yield Returns

Commercial real estate developers are always seeking unicorns, those magical undeveloped acres they can turn into high-yielding properties. Traditionally speaking, these properties are the ones with the greatest number of renters, such as multi-family dwellings, office buildings, storage facilities, hotels, or even those found in specialty niches, like campgrounds. The good news is if you have ever dreamed of developing commercial land into a campground, there has never been a more perfect time.

The Pandemic Was a Game-Changer

More than 25 million RVers take to highways and byways in a typical year, but these last two years have not been typical. The COVID-19 pandemic in 2020 caused widespread lockdowns affecting most industries and hitting hospitality and travel and tourism particularly hard. Instead of canceling vacations altogether, Americans turned their attention to camping to escape the stress of everyday life and stay healthy.

In 2020, there were more than 86.1 million camper households in the U.S, and more than 48.2 million households camped at least once. There were just over 10 million first-time camper households, including both tent campers and RV—motorhomes, travel trailers, and campers. There was such high demand for camp sites that some campgrounds across the United States and the UK reported a 500% increase in reservations up to a year in advance from 2020.

But That’s Not All.

Interest in recreational vehicles is also at an all-time high. An RV owner demographic study found that RV ownership has tripled in size since 2009, and now boasts a record 13 million RV owning households, split almost equally between those over and under the age of 55, thanks to the 18-to-34-year-olds, who now comprise nearly a quarter of the market. The year 2020 also saw its greatest increase of 1.7 million RV owning households, which includes the sales of more than 430,000 new recreational vehicles. Based on shipment projections alone, the industry is expecting new RV sales to grow to more than 500,000 this year and surpass record highs set in 2017.

More Than a Place to Park

According to the Kampgrounds of America 2021 North American Camping Report, one of the most dramatic changes from 2020 was the habits of the campers themselves, who are now more likely to take midweek trips compared to camping only on the weekends. Not surprisingly, campers will be taking these midweek trips more often. The change is linked to an increased ability to work remotely, not just at home but on the road. This is true of students, too. One-third of campers indicated they worked while camping in 2020, and more than 40% indicated they planned to do so in 2021. Campers stayed, on average, six additional nights if they had access to WIFI and cellular service.

These numbers are likely to continue to rise. A recent study projected that by 2028 more than 90 million Americans will work as freelancers, which means more freedom to work from the road.

It should be noted that some have already opted for this lifestyle permanently. There are approximately one million full-time RVers in the U.S. In keeping with the trend, innovative RV manufactures have adapted by offering floorplans that include dedicated office areas with space for a laptop and other office necessities. These office spaces also include multiple USB ports and onboard high-wattage power inverters to keep those digital devices charged up.

As there are more campers on the roads, there will be increased demand for camping sites leading to increased reservations, and in turn, increased profits. RV parks and campgrounds are part of a special commercial real estate asset class that requires little or no additional capital after the initial upfront investment, which can include the cost of the land and infrastructure development.

Costs will vary greatly according to the type of land you intend to develop, whether it is for a campground with primitive sites with no hook-ups or cabins or glamping sites or an RV park with full hook-ups. If you are looking for the highest ROI, give campers what they want: beautiful campgrounds with good infrastructure and modern amenities, such as WIFI, showers and restrooms, sports complexes, swimming pools, fitness centers, playgrounds, and dog parks. To further increase potential profits, look for land with great views and trees that are located close to traditional camping activities like hiking, rock climbing, and water sports.

If you are looking for land for sale, MyEListing can help. MyEListing offers free services to post and view available commercial land. Happy camping. 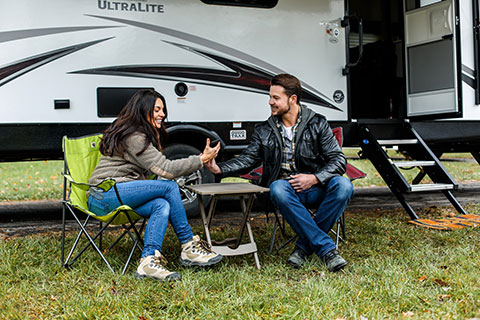